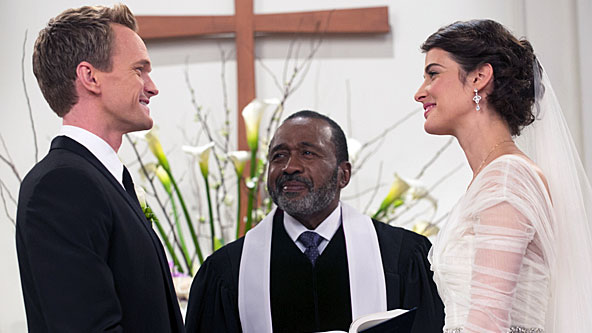 Tonight is our last regular episode not before the penultimate series finale. Like most episodes this season I am both thrilled, but not fully satisfied. Maybe it’s because of the finality of everything. After 9 years I want everything to be extraordinary, but I’m hopeful next week’s finale will properly quench this insatiable thirst thats’s been gnawing at us all these years.

Barney and Robin are both in panic mode just minutes perform their wedding. Robin can’t shake the thought of not having her locket and Barney can’t find the right words to express in his vows.

Robin tells Ted about her upset over Barney not magically finding her locket and how she thought she’d be with someone would come thought for her against all odds. Ted has the locket and gives it to Barney to deliver to Robin in to save the day. However Robin sees through Barney’s lie about finding the locket and knows the locket was really found by Ted. Ted came through for Robin once again and Robin’s realization that “Ted always goes big” for her leads to one of that real conversations they’ve had in a long while. Robin expressed her doubts on not picking Ted. It was both uncomfortable and necessary. I was really happy to see this scene play out and then end with a great speech from Ted about love. However Robin isn’t sold and runs off, and in the process literally runs into the Mother. Mother doesn’t talk to talk Robin out of running away, but instead suggests that Robin take 3 deep breaths before making such a big stressful decision.

Marshall and Lily get into a debate with Barney wedding vows. Barney calls Marshall and Lily out on not keeping their vows and gives specific examples through some never before seen flashbacks. Barney gets Marshall and Lily to doubt their vows and how their relationship has changed. This leads to them “borrowing” the altar and exchanging some very sweet updated vows including a Weird Al reference. Barney witnesses Lily and Marshall’s vows which inspires him to find Robin before the ceremony and he promises to always tell Robin he’s always going to honest with her. He also confessed that Ted got the locket.

Just like that Robin and Barney are back on course, but then Barney has another minor freakout about his tie, but Marshall SLAPS some sense into him right before Robin walks down the aisle to an instrumental version of Sandcastles in the Sand.

Is anyone else worried about Robin having a nip slip in that dress?

I really wish we got a chance to see Narrator Ted delivery some of his epic lines and words of wisdom over the years. The gang delivers so much emotions as the voice overs play, but I wonder what the Ted telling the story’s face looks like as he does.

Does everyone else already feel the need to hate Friends with Better Lives because its “replacing” HIMYM?