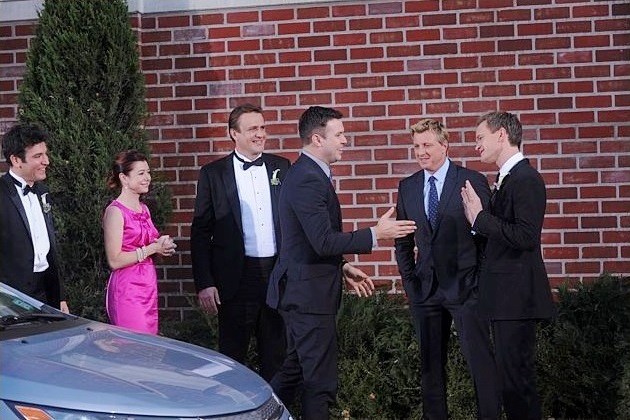 Sorry for the delayed post kids. I spent St. Patrick’s Day in NYC..and woke up in a dumpster all thanks to a guy in a green suit. Kidding…maybe.

Wednesday 8pm – 3 days after the wedding

On their first date Ted tells Mother the story of Gary Blauman. While telling the story mother sees her very recent ex-boyfriend with whom she just broke up with and she decided she isn’t ready to date. Ted continues the story as he walks Mother back to his apartment and delivers such a sweet lilted “this is where I leave you.” But thankfully the Mother comes to her senses since Ted was not longer the guy to make a speech and scare her off.

Back to the day of the wedding. Gary Blauman shows up and throw Robin in a seating chart code red frenzy. Each of the gang members chimes in on if they love or hate Blauman. Ted hates him for cockblocking him (or so he thinks), Lily loves him for intervening while she was in a tattoo parlor and prepared to get a bunch of butterflies and Mark McGrath from Sugar Ray’s face tattooed on her while reeling from her breakup with Marshall. We learn that Barney hates Blauman because he hate his accidental curly fry and THAT cannot be forgiven. Billy Zabka loves Blauman because Blauman loves his poetry. James Stinson hates Blauman because he had an affair with Blauman that ended his marriage. In the end Marshall rules Blauman can stay because the bride wants him there, but not before we are privy to the MOTHER of all “where are they nows” in the form of who Ted still keeps track of.

Perfect blend of stories in this episode. The two plot lines worked so well together and I know I’ve given Ted crap for a while, but all of his scenes with Mother make me fall back in love with him.