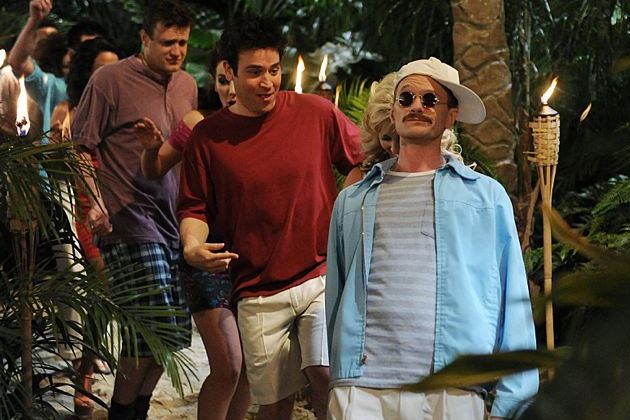 Hola everyone! I’m Will, a friend of Jenn’s. Much like Barney- I’m full of awesome. I’m guest blogging while everyone else is apparently off doing something more fun. So you’re stuck with me, this is my first time- so no making fun.

So here it is ladies and gentlemen, the foretold inglorious end of Ted’s dating life. We got to take our last peek at crazy pants Jeanette as she rampaged and defecated all over Ted’s apartment, finally convincing the ever needy Ted that it’s time to settle down. After being dumped by LT Peterson, Ted agrees to test drive a few plays from Barney’s not-so-destroyed playbook; surprisingly, Ted has difficulty winning ladies over with promises of his penis.

While coaching Ted, Robin walks in on Barney and finds the playbook. Really? I felt the setup for that argument to be a little too artificial. Why does Robin randomly show up at Ted’s house looking for Barney? If Barney told Robin where he was, why would he leave the playbook just sitting on the couch? And does everyone have a key to Ted’s apt? After more deception, I mean magic, they “make up.” I’m not sure Robin is buying Barney’s liar speech- she did mention earlier in the episode that the destruction of the playbook was a key factor in her being willing to marry Barney.

Oh, Lily and Marshall were in this episode as well- the continued focus on Lily’s career is refreshing. Marshall’s deadpan expression carried what is probably  funniest scene thus far this season- “I don’t know if you heard, but I dropped some skittles.”

Marshall: “Just look at her so professional, she hasn’t sat on single piece of art.”

Episode writer George Sloan! Shout out to all those QU alums.

Barney’s awesome ability to unhook Robin’s bra under any circumstance.

Lily’s nip slips (we need more of this in future episodes!)

The Playbook (one last time)

Will Robin ever really trust Barney?

The “Mother” is on deck, how long till we get to meet her?