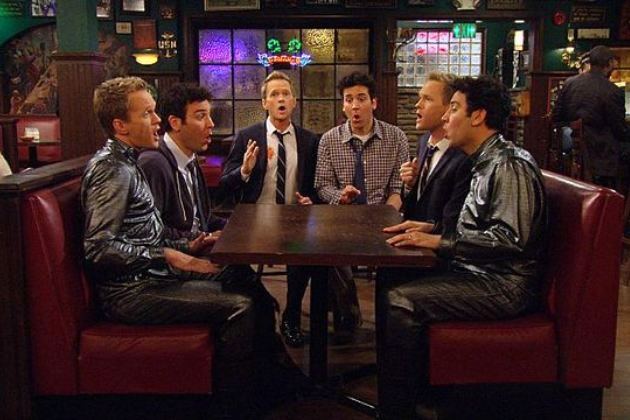 Sorry I’ve been away friends, too much life to discuss sometimes though. Still it’s nice to sit down, grab a beer and enjoy a laugh (and a cry) with Ted and friends. Since that moment I’ve rewatched this episod twice to really get a handle on what happened. The beging is a little out there with future Ted and Barney’s and seriously, how cool would that be to have your future self for advice? By the end of the episode you find out Ted was sitting there all alone and the whole thing had happened 5 years ago… which is a little confusing too. My guess is the dance off for drink title happened five years ago and this is NOT 5 years in the future which would really be screwing with the timeline which may be important since we are 45 Ted days away. Then you have Ted having an imaginary conversation with someone he doesn’t know existed. Overall a lot of symbology and then a laugh till they gut punch you moment.

I love the fact that the writers are slowly crossing theories and loose ends of the bucket list.  I was ecstatic when the theory about Barney’s sister being the mother got debunked (ref. The Carly Theory debunk  s08e14 “Ring Up”). I also know there are those of you that might have even considered coat check girl from Season 1 since he never saw her again … but it looks like he did (5 years ago) and never followed through.  I hope they keep it up, we might even se where that pineapple came from.

Finally, I’ve seen a lot of chatter about thinking the Mother is dead in the future …especially because of Ted’s gut misty eyed 45 day speech his imagines giving to the future Mrs. Mosby at the end. Is it possible? Sure and I can read into how some might read a lot into the details. I don’t buy it though. You should also keep in mind that this is coming from someone who still is pretty fond of the Tracy Theory. Things like that seem to make sense to me…and keep in mind what the writers have done so far this season (mentioned above)… with that said, the dead mother theory still seems like a stretch at this point. I’ve been wrong before though so what are your thoughts?

Ted: No one is saying you need alcohol to have an exciting and memorable night… but in this case.

Marshall: Lily, I know I have the sexual karasima of a bad boy but I don’t have the manners of one.

Future Coat Check Girl: You’ve been dating for a long time Ted…has it ever gone any other way?

Future & Present sing “For the Longest Time” in 6 part harmony.