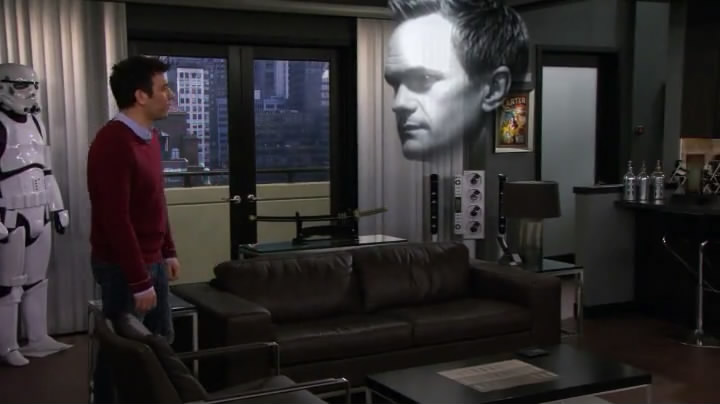 Tonight episode was chock full of laughs for me and it actually somewhat pushed the plot along?!

Robin wants Barney to sell his apartment so they can move into a new place together. We learn about additional crazy custom bells and whistles Barney added to the apartment while they try to sell it, but in the end Robin realize marriage means in sickness and in health and Barney’s apartment is part of his sickness.

Lily’s busy with new job working for the Captain and her over the top outfits, including gigantic glasses (I have the sunglass version of those, True Story). I have to say it’s refreshing to see Lily’s career take on a storyline and give her some direction.

Marshall: You nailed all of Lily’s parts, it’s been 3 weeks since I have.

Ted: Barney I wouldn’t live here even if you scrubbed every inch of this place in Purell, amoxicillin and holy water.

Barney: I am way too upset to point out how many women have seen some beautiful woodwork in there.

Marshall: We have a child together (cue sprinklers – PERFECTION)

Robin: Turns out I accept and appreciate even the grossest, creepiest, most sociopathic parts of you.   //   Barney: Sounds like somebody just wrote her vows.

Ridiculous art descriptions by the captain.

Ted and Marshall GCWKing it up (except they have a kid)

Superman references that I’m sure many of you got, but I didn’t

Did you see the property of Ted Mosby on the map in Barney’s closet?

I don’t know how guys can switch gears from wanting to be in a loving committed to relationship to banging some rando.