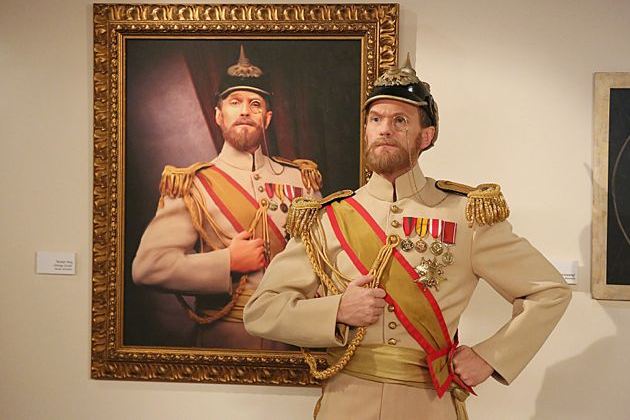 This episode felt very out of sequence for me despite portions of it supposedly happening a year and a half ago. Hello where’s any mention of Jeannette?

The episode boiled down to how one evening at an Art show went. The version Ted recalls after eating a sandwich. The version Robin recall after getting drunk at a “meeting.” The version Barney recalls…oh wait. And the way the night actually went as told by Lily.

We learn that Lily served up her Aldrin Justice by stealing the Captain’s ashtray after he told her she was just an art teacher with no real taste or appreciation for art. The Captain’s comments about Lily just “just being an art teacher” sting hard and causes Lily to nearly meltdown like she did at the end of Season One when she broke off her engagement to Marshall to go to San Francisco. In the end Lily got offered a job by the Captain to be  his new art consultant. For such a long built up, I found it to be a let down.

The good news is my friend George is the lead writer of next week’s episode. He had a great episode last season, so I’m excited about next week. Too bad I’ll be in Orlando so won’ be able to watch it until I get back.

Ted: Anyone with this kind of ashtray money, probably has an island where he hunts people, probably in the Caribbean. I bet there’s good snorkeling.

Marshall: Just some one of them could say Iceberg straight ahead

Robin: Can you please hold a minute  // Captain: Dropping anchor

Barney: Because crazy stories are my thing. You have architecture. Marshall has the law. Lily has art. Robin has pleasing me sexually. You have a passion that drives you. Well I have a passion it’s taking life and turning it into a series of crazy stories, if you can do that me then I don’t even know who I am anymore.

Marshall: I know that we role play conjugal visits a lot, but I can’t do that for realsies.

Ted “snorkeling” with the ashtray

NPH’s delivery of “me neither”

Robin’s make out into a pass out

The Royal Archduke of Grand Fenwick

Just seeing Zoey made me mad. Anyone else?

Did everyone notice all of Marshall and Barney’s “contraband”  in Ted’s apartment?  arcade game, popcorn machine.

Where’d I leave my Prussian military costume? I thought it was just laying around the house.

Where are your best and most exciting days? Ahead of you or behind you?