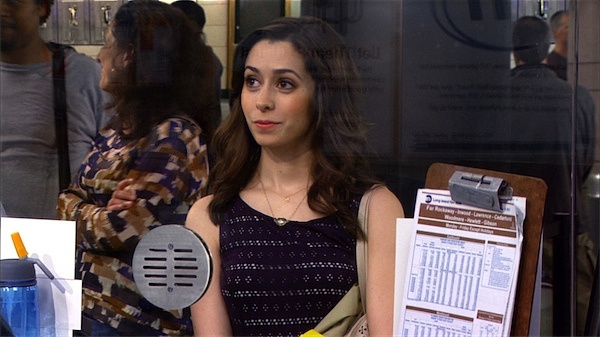 Let’s start off by jumping past the obvious if that’s even possible. I loved Robin & Barney tonight. They were so good together though I truly believe that NPH can pull off a more maniacal laugh…I mean Dr. Horrible. come on. Seriously, they looked in marital harmony tonight and that was good after last week’s breakdown in the park. Which leads us to Ted…

I know, I know… what the hell Ted, right? First off, did finishing the house seem to come out of somewhere? I digress, but when Ted says (this may be a paraphrase), “The locket is in the pencil box. This is awesome. It’s going to blow her mind!”  I can directly see this leading to the bandage on Ted’s hand we saw in Farhampton. How will it happen? Will it have nothing to do with that? Also, will Ted go to Chicago? We already assume he doesn’t sell the house since he is tilling the story in it, but is it ever really that simple? We have to wait till next season, when we will also find out…

If Marshall will remain a judge for now or Lily will go to Rome… or both. I do like the ring of the Honorable Marshal Erikson. My gut says there will be an episode devoted to this next year and I would almost bet they find a way to do both…but HIMYM approaches some tough choices that aren’t always happy so if it’s one I would, say hello to the Honorable Marshal Erikson.

On to the event seemed to break twitter, or maybe the tweets were moving so fast that I couldn’t read them all. The actress is Cristin Milioti… we’ll be taking guess on her show name 😉 Shhort and to the point, that was such a cool moment. Shoes. Bass. Umbrella. “Ticket to Farhampton Please” and face. Great pick for the mother, I love it that she is not a name…and seems like the prefect mix of Lily & Robin. I’m saying this with only one line, many clues and several glimpses of her feet so that may be worth nothing.

My mind is still a buzz so I want to know what you think! Talk away!

Barney: You’re unappetizing to look at

Ted: It was pretty manly until I mentioned Ryan Gosling in the Notebook…

Robin: Hey Lily, help me put this locket in my butt…