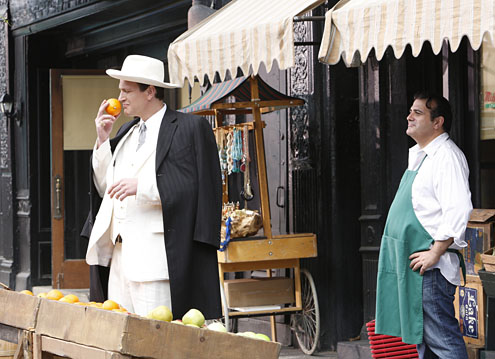 The Captain asks Lily to move with home to Rome for a year. Lily envisions what moving to Rome would really be like with Marshall at home. Meanwhile Marshall has a different vision and channels his inner Godfather.

LiDDY with the hot body, who is their wedding planner. With a REDONKULOUS body and a giant coat. Barney successfully got her to take off her coat since he is a happily engaged man to the love of his life.

Ted opens his big mouth about how to he knows Robin better than Barney which lead Barney to remind Ted that he’s getting married in 3 weeks, not Ted. Cold Harsh Reality Five right there and Ted just took it. I feel something is a-brewin’.

Ted: This girl has the Mission Impossible Ghost Protocol of bodies.

Ted: He took a week of Italian in college and the only reason he dropped it was because he had a conflict…with not being stoned.

Barney: Robin understands there is one set of balls she cannot tie up with a necktie and lightly hit with a ping pong paddle.

Marshall: Bernard, not a good time read the room.

Barney: I want to see the coat on the rack so I can see the rack under the coat

Robin: I bet she has WBD – weapons of bra destruction.

Ted: It’s like trying to describe a rainbow to a blind person.

Barney: Robin, thanks you I can now walk up to any girl and say whatever creepy, disgusting thing I want and totally get away with it.

Lily: I’m small town, Marshall.  I’m a hick from Brooklyn who’s terrified to live more than 10 subway stops from where she grow up.

Getting reamed and seeing a ream of paper sail by

Marshall and Marvin in their matching track suits on a moped

The STINK – loved Marshall’s midwest charm and lack of stink

Marshall and Lily’s conversation in Italian. He was so convincing, it wasn’t until a few sentences in that I realized he kept repeating his same phrase in different inflections.

Robin in the big jacket

Murder Train during a fight scene…classic

I’d totally watch a spin off featuring Bernard from Marshall’s office…anyone else?

Could Liddy be the mother, or is she just a red herring?

Is Robin really the coolest fiance ever? Or is Ted right about her?

I’m glad to see Robin dressing well again. Post Barney breakup and pre get together she was looking homely for a while.

What’s with Lily’s lack of confidence in herself, I don’t get it and I don’t like it. You’d think with a BFF like Robin she could take a few cues from her.