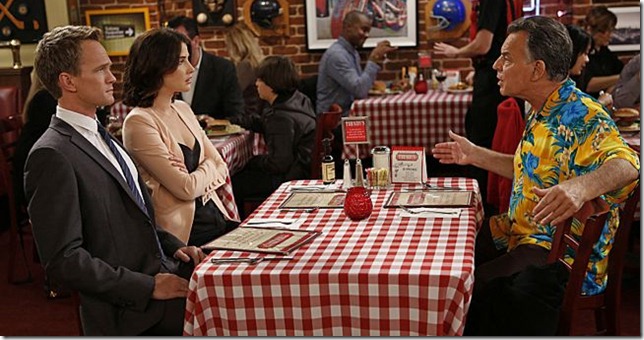 What a crappy episode…literally I mean. most of the jokes were about poop or pee… The episode it’s self was good. The confetti was a nice touch as well. And for those of you still lost in the pun I started with just let your mind catch up. Better now, great…now that we are all together let’s continue.

Poor Ted. Despite hating it every time he and Robin’s relationship is brought back up (and yes, I do think they were good together but not meant to be together), poor Ted. I mean the pain montage is kind of depressing. It was missing some really painful moments though. I mean, how do you leave Stella & the wedding out of that? and the whole scene where Ted & Lily are talking is important in my mind. We really haven’t seen a lot of development from Lily this season… I mean sure she is a mom, but to be up there with Ted & admit it. Especially when you bring in the aspirations from earlier seasons it really reminds you that they are all developing even if you don’t see it on screen a lot.

Confetti… that was just a hilarious moment. Marshal, Marvin, Ted and Lily. I almost spit up my beer… luckily no beer was lost in the writing of this review.

So let’s make clear a few things we learned about the wedding tonight:

This leads me to ask a few questions. First off, we see Ted in the train station in Farhampton (ref. s08e01) with his hand bandaged. If all is well at the end, what happens? Is it a classic Smosby toast gone wrong? Also, I thought it was also said there that things don’t go well? Any guesses to be ventured?

If Cindy give’s Ted the mother number (to call for he band) is it conceivable that he talked to her before but never meets her till then?

May 25, 2013 is coming up pretty quick. I’m curious how we fill another season and a half without meeting the mother? On that thought, would you still love HIMYM if we meet her at the end of Season 8 and then get to see a year after up to Ted’s wedding? I’m here for the ride so either way is find with me. I’m curious what you think?

Ted: The problem is, one of us was definitely not happy.

Robin’s Father (Robin): You should accept my friend request. i post a lot of great stuff.

Waiter:  Would either of you like a mudslide
Barney: No thanks I just had one.

Barney: Oh no! Fluffernutter peed all over my pants!

Cindy’s wife: Ted, do you believe in destiny?
Ted: You really don’t know me.