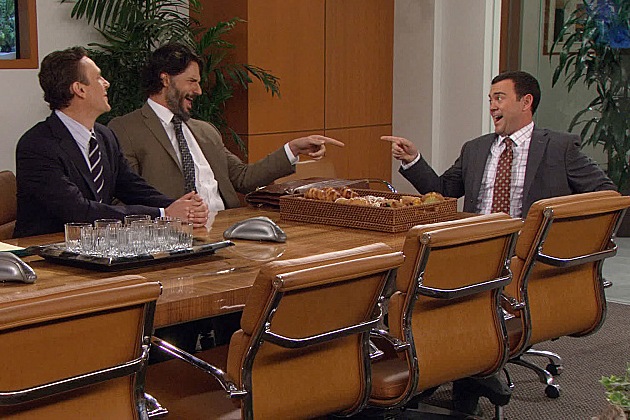 Jenniac at the helm of this ship once again. This week’s episode is centered on Marshall’s St. Cloud given way of giving things his stamp of approval so often that his approval means nothing. This sends Ted into a tizzy to find something he successfully approved without being a piggy back stamper. Meanwhile it’s pretty much a fact in NYC that Barney Stinson only hits up the best boobie and booty shakin’ places, therefore strip club owners are desperate to gain his business since Barney can no longer go to the Lusty Leopard because of Quinn. Robin takes on the ultimate bro role again in Barney’s life as his wheeling and dealing strip club agent.

There were 3 great take aways from tonight’s episode:

With all that being said – today’s episode was kind of like the stuffing at a Thanksgiving meal – it’s filling, but not truly satisfying. The series is moving at a snails pace this season and it really has me anxious about giving this series (and fans) ending to the story it (and we) deserve.

Robin: You are like the LeBron James of strip clubs, actually you’re probably tied with LeBron James for that title

Marshall: They even wound up naming a bridge after him…the one he drove off

Barney: Stickies even sent me a boob shaped hand sanitizer dispenser, it’s clean AND dirty at the same time

Brad: Good just try to stay out there a few minutes, I just cut one and I can tell it’s going to be a slow burn

Brad: I have to go to the little boys room…not your office

Marshall: Remember how I always wanted to know what it was like to be a ghost…well I don’t want that anymore

Barney: I always have fun with you

Carmel and cheese popcorn combo – no, just no

Hearing Narrator Ted say “we’ll get to that”

Robin totally picked Golden Oldies because she doesn’t want Barney to go to strip clubs, she wants to be with him. Amiright?

Is it just me or would Barney and Brad be awesome bromigos?

Lily and Marshall have a VCR too…yeesh?!

Was anyone else really hoping for a Slapsgiving reference?