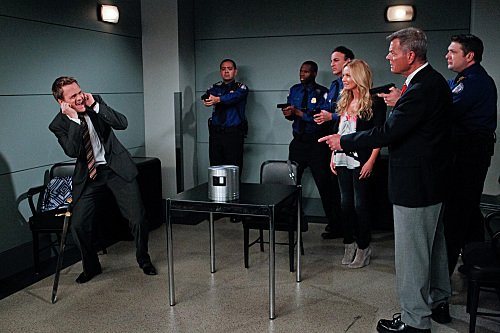 How I Met Your Mother Season 7 Music

This may seem a little odd but for now I’m going to slump these two together . I’ll do my best to keep them separated..but feel free to lump your thoughts together. btw, check back next week as well and I will tell you a story of how I met the set of HIMYM…True Story.

I don’t have a lot to say about this episode. It was awesome to see some focus on Marshall & Lily. In fact this may  be the most even episode of the season. Even, in the sense that everyone was involved. What I don’t get is other than the continuation feel of going from one episode to the next, why call it “The Magician’s Code” as well?

I digress. The point of the episode was baby MArvin “Wait For It” Eriksen… that and possibly giving us enough story lines to fill up next season.

Robin: Once you see a baby erupt through that canal, you stop even touching yourself…

Lily: I remember that suit, he looked like a little kids imaginary friend.

Old Ted: Kids, sometimes the universe sends you exactly what you act for…other times, it sends you Lily’s dad.

Ted: That head was coming out of your best friend

Marshall goes through the green door to find he had been tricked.

This finale honestly seemed so intense at moments I had trouble taking notes…so if I missed anything or got it off, just consider that your invitation to fill in the blank. Cool?

Barney. A wedding that that went horribly wrong. That’s what Ted said. So knowing that and seeing who Barney’s bride was/is… is that good or bad news for Robin/Barney fans? And what else do we know about the wedding once we put the pieces together:

Does that lead you to any conclusions? Or just more questions. Since we won’t know that till later…I’m curious if it caught you by surprise? The proposal to Quinn was predictable, not how Barney planned initially it seems but extremely well played out.
Ted. A bigger suprise may have been Ted’s decision with Victoria. The way I figure things…either he is trying to write “The Wedding Bride Part 2” or HIMYM writers got tired of throwing Robin at us and said “What other woman the we have told fans isn’t the mother that we could put Ted back with before the show ends?” I’m not sure they actually, physically said that but when I played it through in my head it had a female voice saying it. Not sure why. Will they be together at Robin & Barney’s wedding? Will there be cake? Did I mention that I love cake?
So much more to take in honestly, I feel like I need to watch it again to get my full thoughts. I’ll make this all for now though and leave my future thoughts in the comments.

Marshall: I wonder how much this would hurt

Robin: And you threw it all away for some hot piece of ass
Ted: You mean you
Robin: Aww, Thank you.

Barney: Last chance to run away together…

What did you think of either or both parts of the Magician’s code?