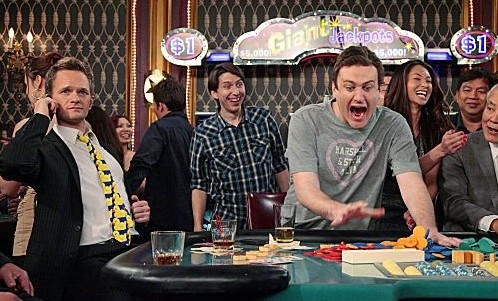 I don’t need to be rescued, so don’t be that guy…
~Quinn

Good Crazy starts out as a crazy slow episode… seems like mostly filler from the onset to me, merely something to set the tone for the two part season 7 finale, the Magician’s Code. Enjoyable and funny? Yes. Was it like driving behind an old lady on a road where you can’t pass while listening to Dave Chapelle? Yes, and so you understand listening to Chapelle is the enjoyable part. So let’s take some elements one at a time.

Ted. First off (first-ly?) I’m sick of Ted not being over Robin. Good grief. With that out of the way, let’s continue. Did anyone else read the fake online dating profile for Ted’s soul mate? The entire situation made me think of Ted’s “Love Solutions” mess from Season 1. I wonder if that will ever play back in… still it’s better than Ted’s other “online dating” situation with Bla Bla thanks to WoW… though the episode (How I Met Everyone Else) did give us the Hot Crazy Scale. Still, Ted role of seeing everywhere tonight just seemed annoying, for reasons put out of the way earlier. And his realization at the end, was even more annoying… I mean seriously people, are we going to drag out Ted & Robin till the day he meets the mother? Sorry, I tried to stay away from it but no luck. The only good thing I could see coming from this is maybe Robin will go into detail with Ted about how she feels about Barney.

Marshall. This dude is definitely taking parenting seriously. Despite just being part of the reason to get Marshall to A.C., a watermelon as a baby is indeed funny… Also delicious, and yes I mean the watermelon. The end of the whole night is also why you can’t trust promotional photos to give you the story. If you end by them alone you would still be in the dark about who Steph was, why marshall is wearing the shirt and the reason Barney looks so shocked and upset. Speaking of Barney…

Barney & Quinn. Lot of Barney tonight. Everywhere. Barney & Ted. Barney & Marshall. Barney & Lily for a brief moment… loved the disguise btw. Still, at the end of the night, Barney & Quinn carry the most interest. Quinn’s prompting for Barney not toe be “that guy” because she didn’t need saving really makes you start to think about the end of the season. Could this be a sign of the end of that relationship or will it bring back into plau Quinn earlier comment that she would quit stripping if she were married? And maybe I’m the only one but I wonder if 15 of the calls are from Lily and one is from Quinn about the decision. What I do know is that we will find out more in a few weeks!

Finally, the condolence five…it’s gonna be a thing

Enough from me, what did you think?

Ted: Condolence high fives are not a thing
Barney: Oh, they are a thing

Marshall: I’m gonna where your pregnant belly as a hat

Marshall: The ducky tie, I thought you threw that thing away?
Barney: I did, it came back…

Marshall: Excuse me miss, when you have a sec please being 100 shots of tequila.
Barney: I’ll have the same.

Watch all the things that happen while the phones are off… plus Marshall’s last cigarette ever?

What did you think of Good Crazy?