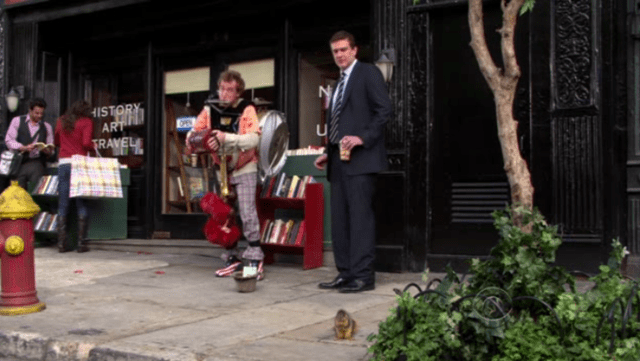 How I Met  Your Mother’s time shift tonight threw me a bit, though it was cool to get to watch “The Bracket” again after the new episode. There seems to be a theme going of people looking out for Ted. Almost like he is a little kid who still needs that in a lot of ways. Last week Lily played the mom role to Ted in The Front Porch, looking out for his bad relationship choices and this week Marshall and Barney do it with his job. Both time Ted ends up being completely cool with it and actually being grateful. Not sure how “real world” that would be but it was at least entertaining. Either way, the whole elaborate lie that comes out to be a good thing is a slightly overdone plot, even if HIMYM does it well.

This ep was decent but not that memorable, a lot of Canadian comedy for sure. In fact, the who sub plotline with sexual euphemisms was funnier than the main plotline of Ted’s job. I do with they would have made the guessing more like a game of clue, plus since Marshall is so awesome at games he should have guesses it. The Snatch-style name cards for the headquarters task force was funny and the security footage of Barney had me laughing pretty hard. Then again, Classic Barney is always funny, no matter how much I think he and Robin should be together. I just like episodes that have moments that seem to stick out…like when we first saw the Awesomeness Poster, the hot crazy scale, the blue horn, or even the Bracket… things like that. This episode was funny but too forgettable. Was I alone on this? What did everyone else think?

Barney: Canada, you did it again. You even found a way to ruin this. Why? Why do we let you be a country?

Ted: I gotta find a way to introduce some wood into Bilson’s dark atrium… I think you know what I meant.

Marshall: If I could nail any celebrity it would be Lily, she’s the star of my heart.
Lily: Awww….. for me it would be Hugh Jackman

Marshall:  Sturgeon. I don’t think so, pal.  Salmon… let me say it again. Salmon. Who came up with that, right? Bass. This guy over here knows what I’m talking about.

Ted: So my game winning walk was a lie?

Ted: Anything you wanna lie about before I get fired?
Barney: That’s a nice shirt.
Ted: You’re the devil.

Lily: Anyone from the band Rush, a Montreal meat pie and super hero lunch boxes.

The real story with Robin and the Canadian Snow Show. He shows off his collection of Trays. She asks for an Old King Clancy and get rejected. By the way make sure to visit the site from the show http://www.canadiansexacts.org/ it is SWF(and not for profit… they really just wanna get the information out there)..it’s actually pretty funny. Plus an actual Canadian celebrity…Alan Thicke (who was also Robin’s Sparkles video dad for Sandcastles in the Sand)

Here is an example for those of you still to scared to visit: