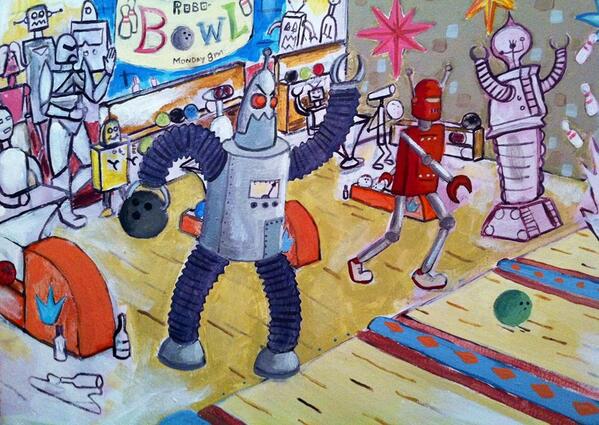 200 episodes in and the level of emotional brilliance in unbelievable. Every moment of this episode is already an instant classic. Please excuse any injustices I give it in my recap, there was just too much awesomeness.

The episode opens at MacLaren’s Pub, but on that fateful day in September 2005 where Ted starts telling his kids the story of how he met their mother, except tonight we learn how Mother met him. First we learn that there is ANOTHER MacLaren’s Pub across the city, which is very New York. Next we learn that fateful September day in 2005 when Lily and Marshall got engaged and Ted met Robin was Mother’s 21st birthday and also the day she finds out her true love, Max has died. Mother is heartbroken.

Next we flashforward (or backwards based on how you look at it) to April 2008. Mother’s roommate convinces her to go out for St. Patrick’s Day despite the impending rain, which causes Mother to bring her trusty yellow umbrella. At the club, Mother runs into Mitch, aka twitter trending Naked Man, who pulls his 3rd Naked Man. Naked Man ends up giving Mother a pep talk that leads to her going back to school to get a degree in economics, which brings us to fall 2009, where Mother meets Cindy in the economics class that Ted mistakenly goes to on his first day at Columbia. Mother is the only person in the room to laugh at Ted’s lame selfish/shellfish joke.

Then we jump to January 2010 when Ted is at Cindy’s apartment admiring Mother’s belongings and he leaves the yellow umbrella. Cindy fills Mother in on essentially how perfect Ted is for her, but Cindy also then realized how perfect and awesome Mother is and plants a smackaroo on her. As we know Cindy falls in love with a nice girl and moves out therefore looking for a roommate and meets Darren who ends up taking over the band. Jump to April 2012 when Mother meets Louis who take her to the Gang’s MacLaren’s and we learn Louis was there the night Ted and Barney took it over and called it Puzzles. Mother and Louis go on to date, which leads up to Barney and Robin’s Wedding.

Mother stays at Louis’ beach house while in Farhampton to play at Barney and Robin’s reception, which then seamlessly transitions Mother into what we know about her time spent with Lily and then Marshall. After Darren quits the band and buys “the best man” a double of Linus’ finest scotch she heads home to find Louis on bended knee, proposing.

At this point the episode was everything I wanted to be, but then it has to go “Pull a HIMYM” and take things to a heart-strings pulling level like no other. Before answering Louis, Mother takes a moment and heads outside to talk to someone. And looking upwards at the Heavens, Mother has a moving conversation with her late love, Max. Mother’s emotions while letting go of Max just cut through every fiber of my being (apparently along with the rest of the HIMYM fanbase). Mother turns down Louis’ proposal and checks in at the Farhampton Inn since Robin’s mother didn’t come and therefore there is an open room, which happens to be next to Ted’s.

The closing scene has Mother on the balcony of her room playing and singing a hauntingly beautiful version of “la vie en rose” on her ukulele. As Mother sings we see where the gang is at that moment. Marshall on the bed of his room looking devastated, Lily in the car looking upset, Robin restless in bed, Barney on a cot finishing off a bottle of liquor and Ted, Ted out on the balcony listening to the Mother’s song.

Ted (in his beloved Wesleyan tshirt) comes in from the balcony to tell Barney, who had been sleeping on a cot in his room, about hearing the Mother’s song, but discovers that Barney is gone.

Am I alone in LOVING how Mother delivers lines, especially when she kind of realistically stream of consciousness stumbles over them? Same sentence: “I think I am about to enter my Roberts doing track and field (cuteness) events period. I first noticed it when she practiced her Darrin speech to Linus.

How long did it take you to place Mitch as the Naked Man?

Speaking of how Mother delivers lines, her deadpan come backs are superb. Don’t you agree?

How many near misses of Ted and Mother actually MEETING did you count?

Did you notice the “Welcome Aboard” sign in the background of Louis’ porch as mother leaves? It was a subtle Captain reference in my opinion.