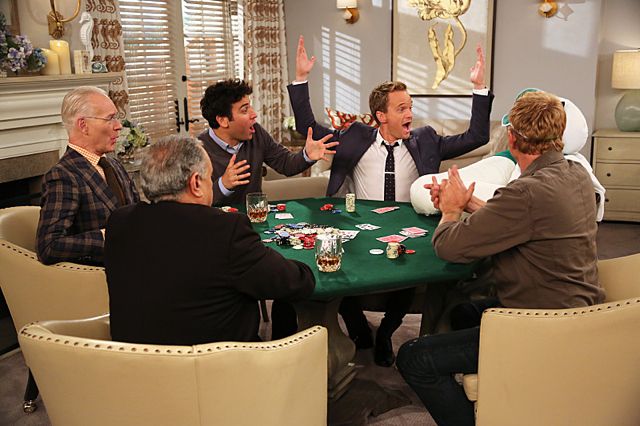 It’s good to be back in the saddle so to speak…though, there is no horse…to hell with it, I don’t feel like thinking of another metaphor there so I digress. Huge thanks to Jenn for filling in when I’m unreliable. So let’s get to some talking shall we?

How are we feeling about the new-ish format? Meaning the whole xx-hours before the wedding? I feel like it keeps the last season a bit more contained, which is both good a bad. Tonight I was expecting a little more from it and maybe that is just me expecting predictable. Predictable would have been to make the mother Robin’s new friend, which I still think will happen before the end. And I think most fans (including…nay…especially me, want to see more of her already). The format tonight almost felt stifling and like filler. I mean sure we needed to get the tension between Ted & Barney out there but what else just had to happen? Maybe someting will come back up, you know how details work and all right?

Let’s talk about Barney & Ted for a moment. Two things were obvious tonight: 1. The conversation and preceding charades between Barney & Ted needed to happen. & 2. They are REALLY trying to sell more copies of the Bro Code.  The whole thing was funny, but do you think that is the last of it or is there more to come? Loved the players at Barney’s bachelor poker game, always nice to see old friends show back up, but where was James and who else would you like to have seen there? And one can only hope that Ralph Macchio will eventually show up and save Ted from Billy Zabka.

So what did you think of the Broken Code?

Ted:Hurtz?
Lilly: It hurts a little but I’m not going to cry about it.

Lily: Be yourself, say something nice.
Robin: Which one? I can’t do both!

Weekend and Barney’s but with Robot Marshall