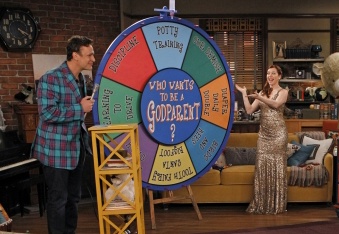 After how underwhelmed I was last week, tonight was welcome. Great job HIMYM peeps. “Who Want’s to be a Godparent” was excellent, well  executed, and above all funny.  Being in the midst of  the “Autumn of Break-ups” (ref. The Pre-Nup s08e02)really give HIMYM a lot of game to work with. I’ll get more into that in a second…

Marshall & Lily. While they may be backeinto a corner normally with the jokes now they these two have a kid, it’s great to see an original (this may not be completely true, but it’s the first time I’ve seen it) twist on being a Godparent.  Plus any callbacks to what a mad gamer Marshall is are always welcome, it’s one of the running jokes I can’t get enough of… did I ever mention I made my own Marshgammon game? I’ll post some pics soon.  The 8 or higher rule (ref. Magician’s Code Part 2 s07e24) served as both funny and emotional tonight. Really sappy more than emotional. Lily is hot is the new dress and Marshall’s jacket is a fashion trend waiting to happen… Also, I’d love to have one of the wheels in my house but, I’m not sure what I’d use it for. Still, in many ways it is The End of an Era” and nothing is really going to change that no matter how much they struggle to make it happen.

Barney. Probaly the bet part of the Autumn of Breakups is getting to see some of the sex-aholic Barney that every one loves. High fiving, waiting for it… bro-ing,  coming up with new schemes. It’s what we all love. He easily stole the show tonight. When will he get back to the pursuit of Robin? How? Do we want to keep waiting for it as well? If only so that we get the laughs that only the Barnacle can provide? When he walks out eh door at 5.13 am I lost it. Finally, Marvin in a suit rocks.

Ted. Professor infosaurus has to be one of the lamest things Ted has come up with yet… so much so it’s hilarious.  Where do you get one of these things? In fact all of Ted’s flash forwards were predictable geeky and overly entertaining… I do often wonder how close Ted’s character is to Josh Radin’s real life… I’m sure he is awesome though…

Robin. Ted’s new found financial crisis, while paying for a house he hasn’t moved into and an apartment… might be grounds to think Victoria will go first but my money is on Robin as the next breakup we see. I’m not sure why I feel that way, just a gut feeling. The scooter may run on corn and be eco friendly but it’s definitely not cool… especially after seeing Robin in the leather outfit. Oh my.

That’s my thoughts in a nutshell, what did you think?

Barney: Barney Stinson, how may I direct my penis.

Robin: If you want him raised by his underwear on the flagpole you should choose ted

Robin: Why is he talking to the wall

Ted:… Even I, Lily and Marshall’s best friend…

Marshall: Robin wins the round… because we love her and she is in a safe space.

Robin: As the only one packing a vag here, I have the natural instinct for nurturing and crap like that.

Barney: Ted, neither you nor cleveland know how to get over someone leaving them.

Marshall: You’re our best friends, EVERYTHING is an 8 or higher…