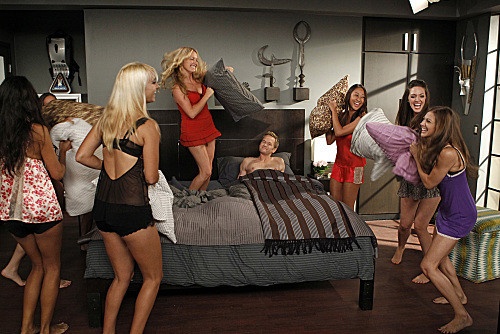 …Let’s take tonight a couple at a time, shall we?

Marshall & Lily. Again, Marshall is the funnies overall on the show… Lily is a nympho. The jokes really never seem to get old there… especially when they pull out the “honka, honka” talk. Plus we know they are solid and not going anywhere. I’m not all about the baby, but it’s great to watch.

Barney & Quinn. I was kinda bummed by how quickly they were done. And to be honest, they were not my first guess as the couple to go, though looking back it may be the obvious choice.  The fact that not trusting each other just now comes up… or maybe it had before, just not that directly… really caught me off guard. Good writing. And on another note, whether you liked Becky Newton’s character or not, she is gorgeous. Will this be the last we see of Quinn? I find it hard to believe that anyone else could enter the picture..and we know that Barney & Robin are moving together… though we have no idea where it ends. I’d love to see her back, even briefly.

Nick & Robin. Talk about quick moving… We really have to remind ourselves that most of this relationship has taken place off screen or when there were no good stories to tell. I feel like it will get it’s day in the sun though… and that may be the bulk of an episode that ends with the end of the relationship. Still Nick in the bar talking with all the guys felt good overall. Not out of place or rushed…. unless you rally don’t get the whole passage of time thing. Overall, I like and Robin together and I’m interested to see where it goes.

Ted & Victoria. and I guess Klaus at the moment. And just how awkward will that be? Is it a possible recipe for break up? Ted & Victoria are just kinda there tonight… especially in the comedy department… Klaus though, funny guy. I may be missing some of the German jokes though. And yes, I though for sure they would end first. It’s not often I admit that I’m wrong so mark it.

If you are looking for story over comedy then last week was all for you… Now please don’t think I’m saying that Farhampton was bad… it just wasn’t as funny as tonight. Either way, I enjoyed both but for different reasons. Tonight, it was just time for a good laugh.

Barney: First of all, if you have an onion be gel, you don’t need scallion creme cheese

Quinn: What woman want’s her breast squeezed like a seal horn.

Future Ted: The next day one of these four couples broke up!….. Okay it wasn’t lily and marshall….

Nick:… oh I’m sorry, I didn’t realize it takes 42″ to keep you satisfied

Author: I’m just getting back in the game… the red with the baby, whats the situation?

Klaus: This is a popular German situational comedy–one is very neat, the other very very neat  (hooray for German jokes)

New Jersey (What was Bad)

Finally, Don’t forget that HIMYM Season 7 comes out on DVD tomorrow (or today… possibly in the past when you are reading this… time travel right?)