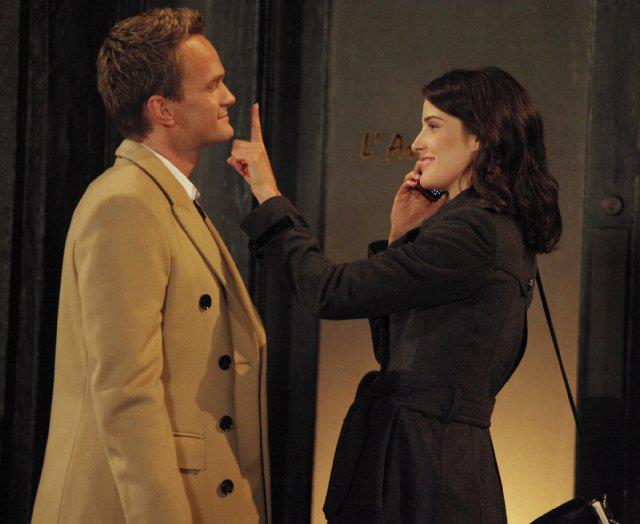 Hey gang, Jenniac here back in the driver’s with Aaron as my co-pilot to recap, review and re-examine this week’s episode – Splitsville. Like many of you who have sounded off in the comments, this season has not been what many of us hoped it to be. As frustrated at the storylines are at times for me, I was reminded while taking notes on tonight’s episode just how subtle and funny HIMYM can be.

We knew the last breakup had to happen sometime soon right? Why not tonight. In my opinion I felt tonight was a great follow up to last week’s the Autumn of Break- Ups. I have say I was really disappointed that we never learned how Robin and Nick’s relationship came to be after the Ted proposal fiasco when she saw Nick out last season.

The biggest take away of this episode was Barney’s declaration of love toward Robin. I was stunned, but not surprised. HIMYM has gotten really good at smoke and mirrors. I am sometimes distracted by the stories right in front of me that I initially miss some of the implications on a larger scale. I often need to watch an episode 2 or 3 times to get a full grasp of everything on both the micro and macro scale. Whoa did I just drop some economic class terms…BOOM.

Robin: So you guys think he’s dumb too.
Lily: Hot as lava but just as thick.

Marshall: Robin, he got 36 points and 10 rebounds last week… and that was with his shoes on the wrong feet.

Robin: As a couple we are not working out.
Nick: You want to start going to the gym together?

Robin: Order whatever you want. It’s on me.
Nick: Thanks, but I think I’d rather eat it out of a bowl.

Barney: She thinks your stupid and she hates you.

Barney: No, if I don’t give you a push you’ll be right back to having sex with Nick and procrastinating on all fours.

Nick: It feels like I have a pulled groin muscle in my heart.

Barney: I could not stop loving her anymore than I could stop breathing.

Barney: Tricking good looking idiots is kind of my thing

– Marshall wearing the baby and working out… and then with Barney on his back.

– Splitsville… the place to end a relationship… with yellow flowers everywhere.

– Nick, despite being dumb is hilarious this week. Especially mispronoucning his torn ligament.

– Marhsall pep talk to his team. Adult social sports leagues ARE really serious – this was totally accurate based on my previous experiences.

– Barney confessing he is still on love with Robin, “she has a hold on my heart I can’t break…I’m hopelessly irretriveably in love with her” – Robin face looking at him as it said that, said it all.

– The best part is that the gang heard all of this since it was on speaker phone. Ted seemed to take it well despite Victoria essentially dumping him because of Robin.

-Where was the glass shattering call back when Robin realized Nick was dumb?

– As funny as Nick being dumb  was– I it came too far out of left field and it was too much at times. I did appreciate the comments about him not knowing how to dress himself  “and that was with his shoes on the wrong feet” and “misbuttoned shirt and inside out underpants.” However as far as I could tell in the basketball scenes his shoes were on the proper feet and he looked well dressed.

– Marvin crying on cue to interrupt Lily and Marshall’s sex life. SO much baby stuff has been recycled from 1000 other shows, I expecte more HIMYM.

the T-squares at Splitsville.  Ted’s shot isn’t going to count…. and even worse…it’s over.

Has anyone else ever eaten a scented candle? I’m not going to lie, but I’ve been tempted.

Where is Micky Aldrin? Why isn’t he babysitting Marvin so Marshall and Lily can get. it. on.

If this ends up being the last season of the show, are viewers going to be cheated due to the pace the show would need to take to give us all much closure as possible?