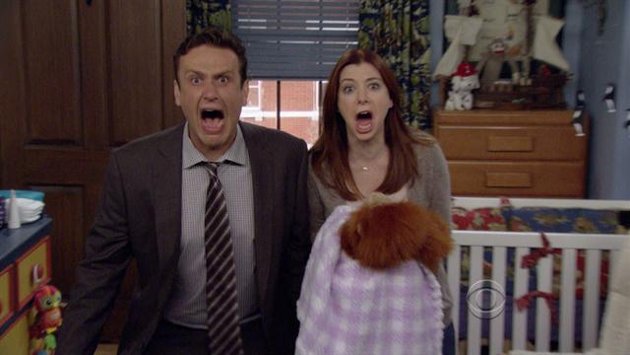 I apologize in advance because I’m not sure I’ve got a lot to say tonight. Things seemed kind of slow, to me… and in fairness to the show, the actors and all of the rest of us in the cheap seats, maybe that’s just a reflection of how my day went. I digress.

Barney. It’s always nice to see Barney still trying to be the only Barney, even though most of us have realized by now that he has changed. Bangtoberfest was evidence of that… and a brilliant marketing department. Like so many other Barney moments and schemes it comes complete with a eloquently planned website (heynannynanny.com). It’s a little funnier if you view the site before the episode ended like I did. Let’s you know something is coming. Still I wonder if this is the last we will see of Quinn. And honestly the whole episode I was secretly hoping that Mrs. Buckminster was secretly Micky trying to pull a Mrs. Doubtfire over on Lily & Marshall… however that would have made the Re-Return moment at the end quite awkward.

Ted. Robin. Victoria. Nick. We did get a timeline out of all of this.. though in HIMYM world, somedays a month means a season or 3 and other days it’s the opening part of the episode?

Marshall… and even more so Lily. We’ve seen that Lily has been having some trust issues with MArshall & Baby Marvin Waitforit Erikson,  because of her dad. Usually I enjoy looking at Lily a lot more than I enjoy her character but it’s nice to get some meaningful backstory on her. The conclusion though probably means Chris Elliot will be around a little longer. He is there mostly for laughs but I get that some of you out there aren’t fans. It tough not to like him after the photo album though.

Sorry I don’t have much more to say, but I’d love to hear from you guys and talk a little. Sound off.

Marshall: No experience as a nanny?
Interviewee: Nope, but I took care of the cats in rehab and only two died so…

Marshall: I want to bury my head in the safety of your bosom

Lily: You son of…itch-bay!  (only because I like it better than her usual use of the line)

Barney: In the end the coroners report confirmed what I had feared, the female body can not withstand that many consecutive orgasims …

Ted: At least I’m not dating a girl…you know what I mean.

Nick: I don’t want you to fix this honey, I just want to be heard

Barney: I woke up in a dumpster covered in diapers… and I found a pacifier somewhere I’m not willing to disclose.

Barney, never doubting a classic… and getting Mrs. Buckminster to help him change.  And then… well funny but gross.

Finally, Don’t forget that HIMYM Season 7 is out !