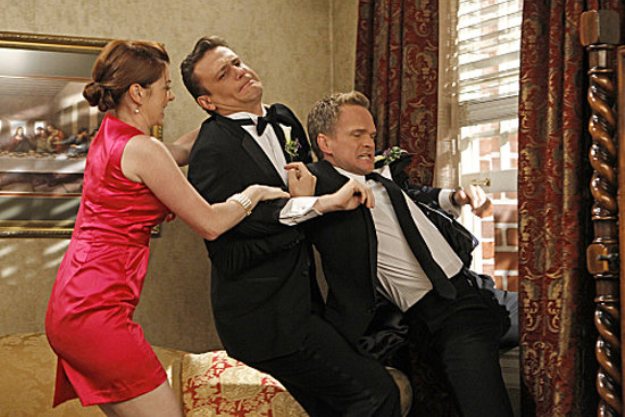 This will probably be shorter than usual, sorry for that in advance. Maybe I’m just tired or maybe I simply don’t have that much to say at the moment. If anything I think I saw too much in in the Season 8 previews and it ruined it for me, maybe I watched them all after 2am… nothing good happens after 2am as we all know. I honestly felt that short of the train station happenings I saw the whole episode before it aired. So let this be a lesson kids, don’t watch previews…Especially after 2am.

Ted. Where was I, oh yea… Several things did happen tonight that open up some new possibilities for the future, whether it ends in 23 more episodes or 2 years from now. The big one is Ted at Farhampton Train station. So should we read anything from Ted reading Love in the time of Cholera or is he just being a hopeless romantic douche again? So we know from what he says that things don’t end well at Robin & Barney’s wedding. We can see that as obvious as both of them try to run out the windows, but the windows bring us back to the story of Victoria and Klaus… which also don’t end well. This in tern leads to TEd being at eh station with the yellow umbrella… and as we assume, the mother. Now she may be awesome and everything Ted has hoped for… but she isn’t smart enough to walk in out of the rain. This leads us to questions about…
Robin and Barney. We know it’s their wedding. We know they are both panicking. We know ted say teh wedding went badly… but does that mean they don’t get married? I’ve ready where either Craig or Carter said something like the wedding does take place… but what goes wrong? Also, this leads me to wonder what causes the demise of Barney & Quinn? And Robin and Nick for that matter? So many questions and so little uncertainty about how much HIMYM we have left. And while I’m sure many of you just want it to be over with… I like knowing at least timelines for sure. I digress. What I’m getting at is this… why are Robin & Barney freaking out? Is is over teh wedding? The finality? Because it’s scripted? Because of Quinn & Nick (respectively, not necessarily together)? We know that complications ensue… that’s the alternate title for the show it seems.
Marshall & Lily. The zombie things started really slow for me… but it caused some funny moments. I will say this, Marshall is the funniest guy on the show. Sure you have some great moments from everyone else…but overall he is the reason we still get to call HIMYM a comedy some nights… Also, having been about 5 ft from Alyson Hannigan, I’ll just say that she is gorgeous wherever she is.
With that said, I for one can’t wait for a great Season 8 and too see what else happens. To say that I’m not emotionally invested on any level is a complete fabrication. I love the show, the stories, the characters…and even when I don’t laugh as much as I want, I’m still waiting around next week for a glimpse into the lives of characters I’ve grown, not just to love, but grown with. So while I don’t have much more to say and before I get to my favorite parts I’d love to share a clip from the tube of You.  Behind the scenes from Season 8… believe me if you watched tonight, it’s not full of spoilers.

Marshall: Yea Robin, we aren’t gonna be the kind of people who have zombies and become total babies.

Victoria: One look and he will know it’s not a girls handwriting, no wait…we’re good.

Barney: I’ve destroyed every piece of evidence that you and I were ever a couple.  (sad moment but a great slideshow, IMHO)

Barney: … Ted got a tramp stamp, not really revelant to the story, I just like to mention it as much as possible…also I went on The Price is Right and I won a dune buggy

Klaus: I’m not sure what kind of vibe I was giving off earlier, but I’m not interested in your snitzel.

Klaus: Oh, my bad. Kindergarten is a German word…
Ted: No, I got that, thanks.